Today was pretty basic. Apart from the normal "get Geof for lunch", I went to ACE hardware for a couple screws to attach a cushion to Leila's bitch seat. It was either stolen or fell off at some point, so had to order a new one. Then gave myself a blister while attaching it. 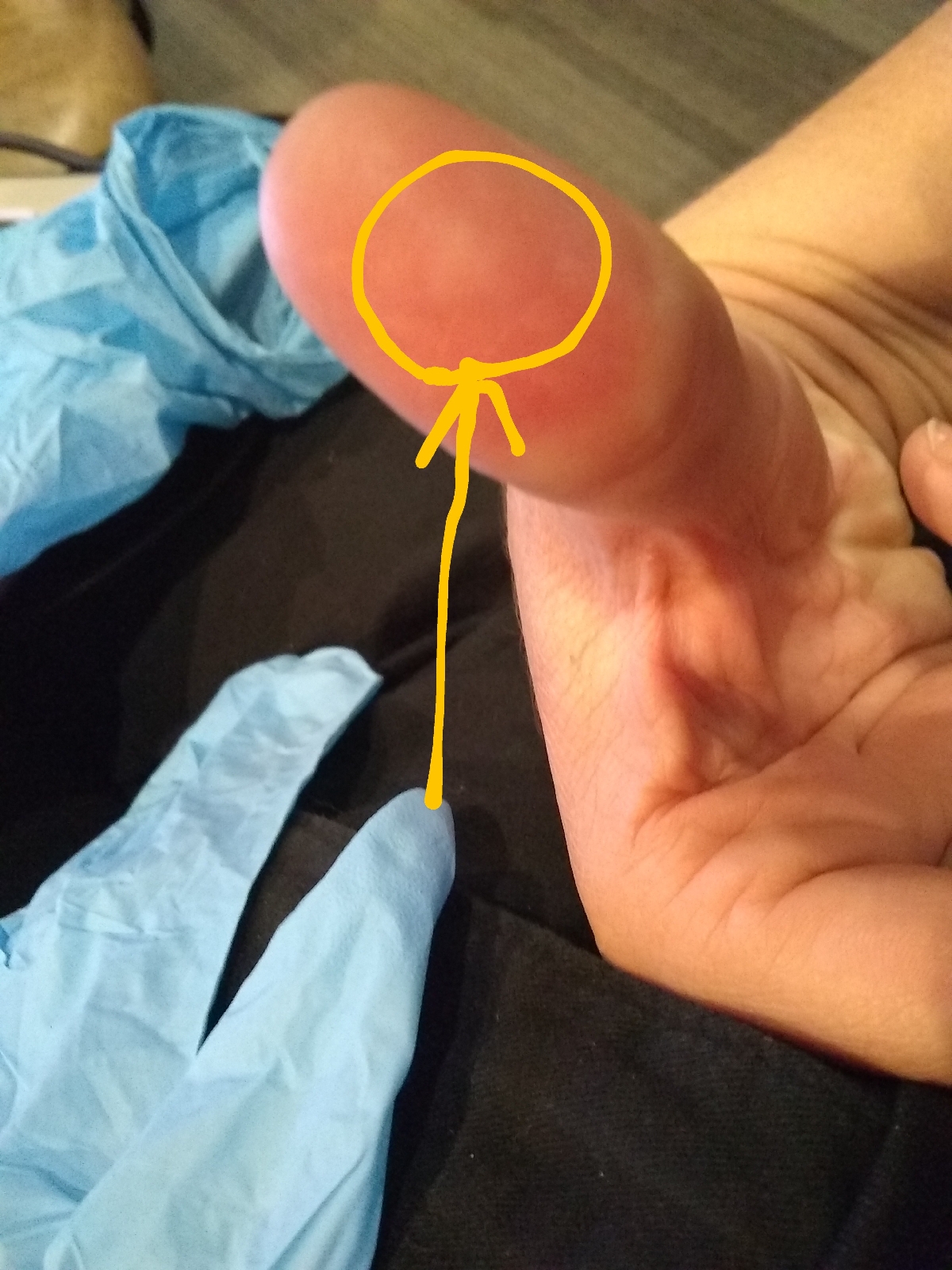 Then I had to wait for my parent's delivery 'cause the delivery required a signature from an adult and mom & dad had to go sign bank paperwork 'cause the bank lost it 🙄.
The delivery came less than 10 minutes after they left and only asked for my last name. I then opened it for them because it's just what I do. Plus I already knew what it was. It was blueberry mead and a couple glasses from Artivem Mead Co., my younger brother's new business. I took pictures for mom, you may enjoy them as well: 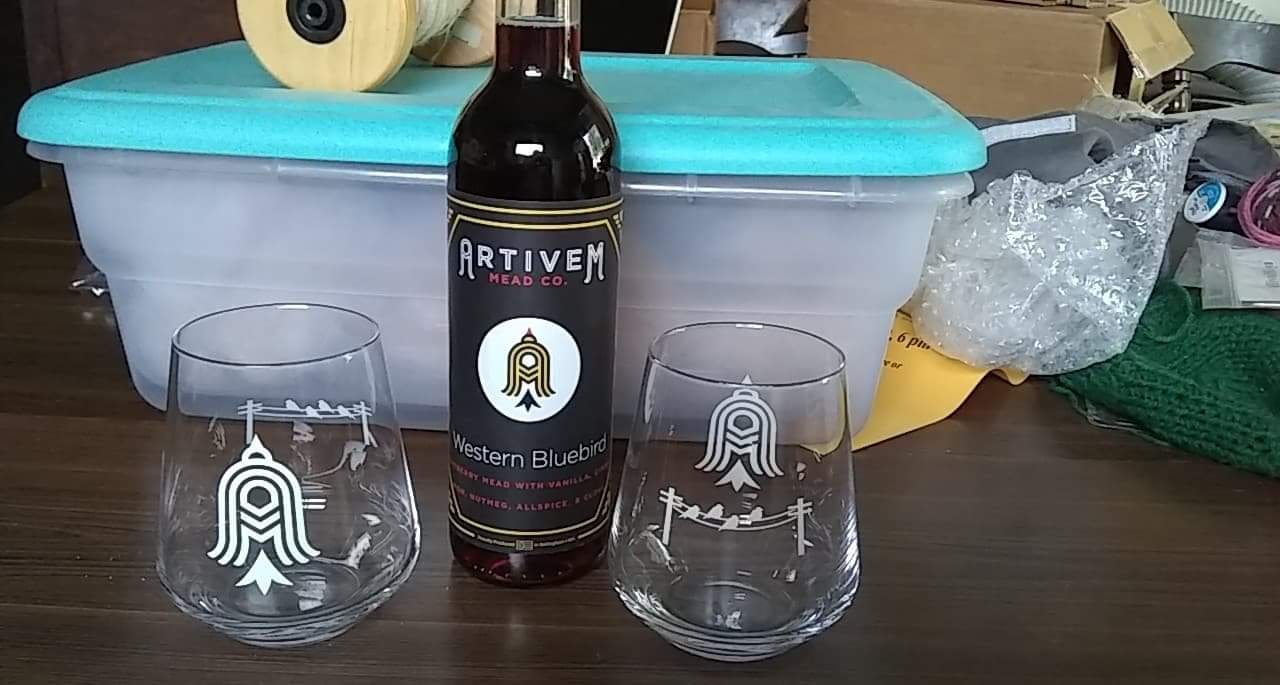 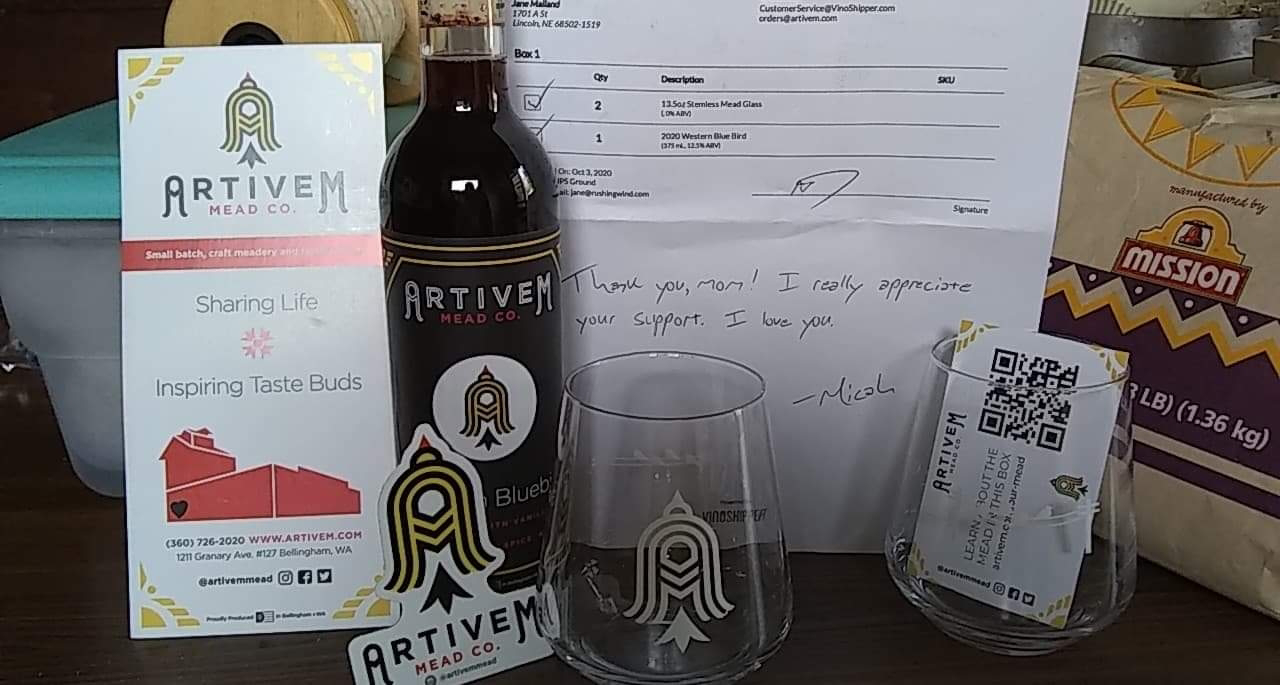 Then I spent some time in the bathroom for the IBS before picking up Geof from work.
Next was parent teacher conferences, which we did online. Evelyn isn't having any struggles, so they went very quickly. Geof and I decided to go out for motorcycle gas, fancy soda from Hy-Vee, and dinner from Qdoba afterwards.
While at Hy-Vee Geof remembered that I have to work tonight. Unhappy reminder, but necessary. So ended up getting Qdoba to go and eating at home, which was probably the safest option anyway.
Before heading to work Geof mentioned I have a delivery on its way from POP Fit Clothing. I signed up for their VIP membership, so each month I get a new pair of tights in the mail. I love their tights. They're slick and comfy, never see through and all of them have pockets! I also use tights under my clothes instead of underwear (underwear isn't healthy, so I stopped wearing it), so I have a few pair of shorts tights from them too. I'm excited to see what color is coming this time. Don't know how long they'll take to arrive, but I'll definitely update here when they do!
Anywho, I'm at work now. I'll be here till 3 am. I'm wearing my new mask (someone not wearing one just complimented it lol, wtf?). Unless people stop coming and going long enough, I'll probably not take it off all night (apart from my outdoor patrols). It's already uncomfortable, so we'll see how it goes. I'd much rather suffer than get my family sick, though, so it's a sacrifice I must make to protect my family.
Did I mention we're planning to start wearing masks at home too? Should've been all along, but it's an annoyance and inconvenient. With as bad as it's getting here in Nebraska, though, I think we have little choice at this point. My chances of getting infected are high despite the mask, 'cause it can supposedly get in via eyes, so I just hope I stay lucky.
As usual, few here @ work are wearing masks (none of the people who are partying in large groups and tiny apartments). All of Nebraska has basically decided, despite the extreme rise in cases, that the social distancing and mask wearing should be over. God help us all.
Sigh...
I feel like I failed to make today's post funny. I'm a massive failure, I know (and don't you fucking argue with me, I'm not nearly negative enough to actually believe that bullshit). I promise I might do better next time.
Ooooh! I might have something funny for you!! It's a Facebook conversation that's in process. I'll preface for you: There was that 7 hour stand-off in Eagle which I told you about. Well, in Facebook I didn't get nearly so snarky, but I did ask if the guy was white. This question hit a nerve in some Karen (just ignore her posted name, 'cause she's definitely Karen), and the following has come from it: 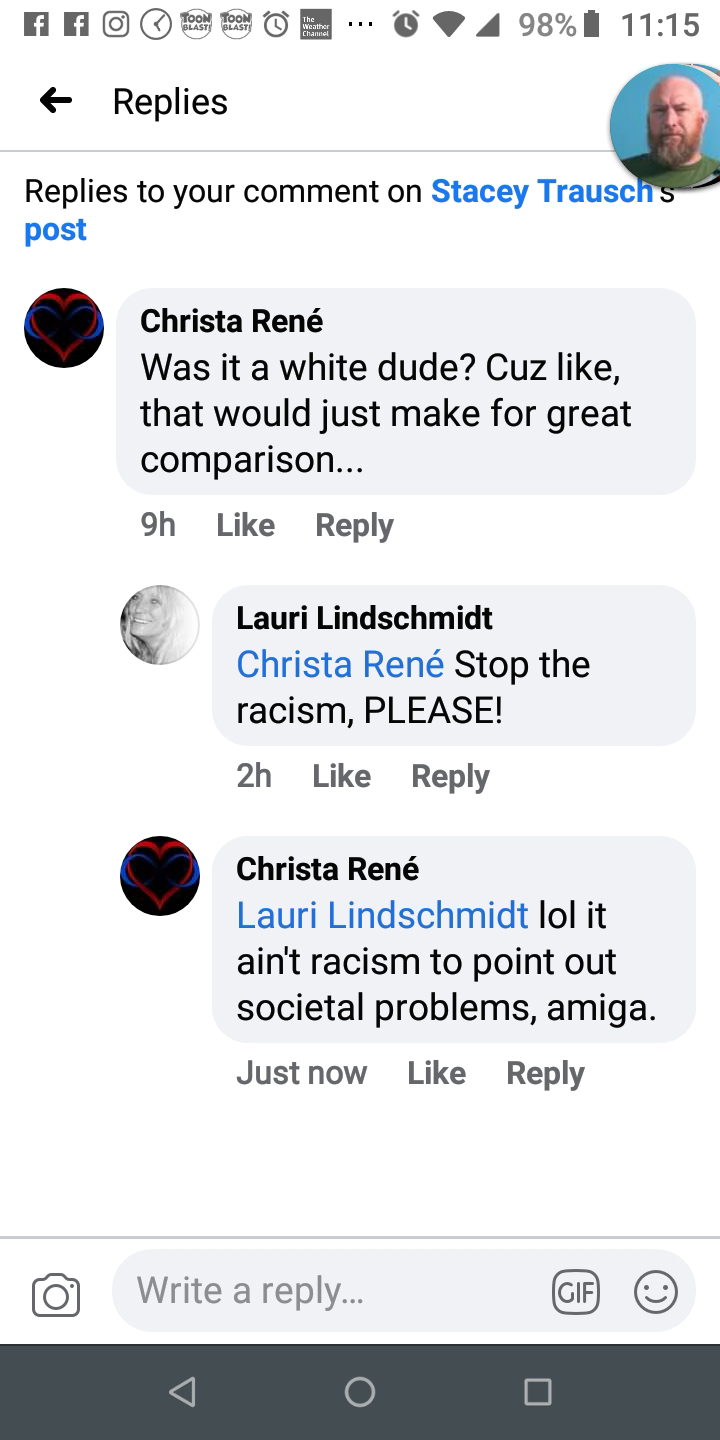 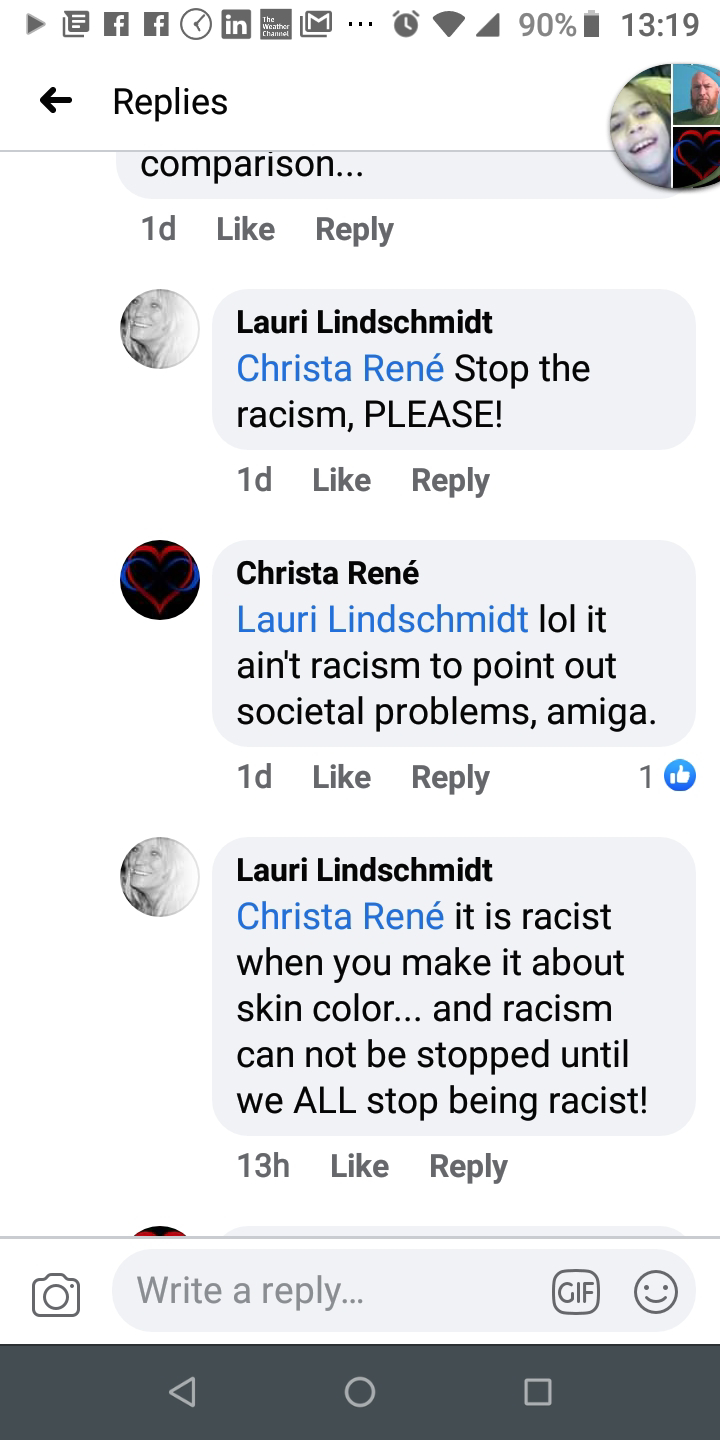 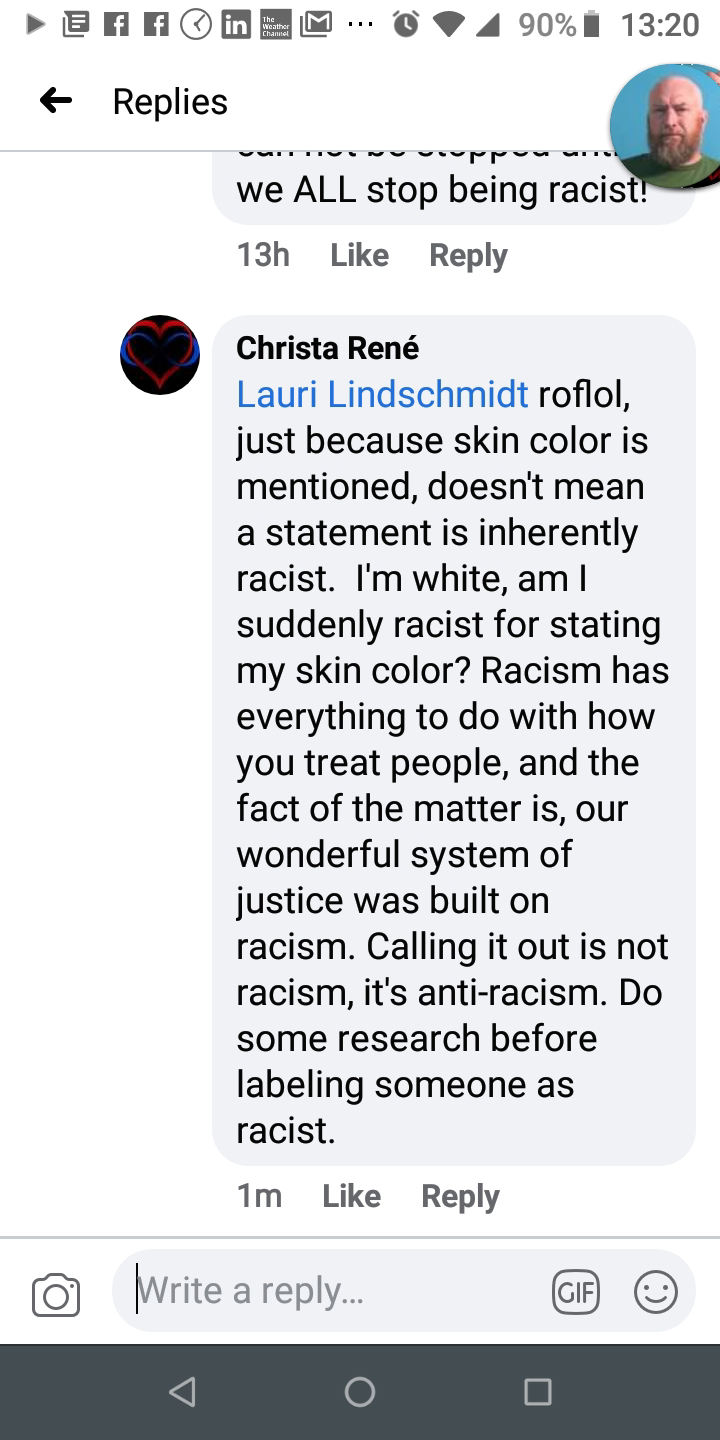 Ok, so maybe only funny to me. It's just so absurd to have someone call me racist 😂. I feel like she's going to keep trying to press the issue. If she does, should I get a little crazy and say something to trigger her more? Or just ignore her? I so enjoy trolling... But maybe it's not a good idea here...? Give me input!!
Until next time, my peeps, go rub some velvet, cuz it's a lovely feeling. 💛💛
at October 08, 2020

Welcome to the Adventure

I am Christa René. Geof and I decided to create this parallel blog to chronicle our adventures. We have adventures every day. Our adventures...

Geof's Side of the Story